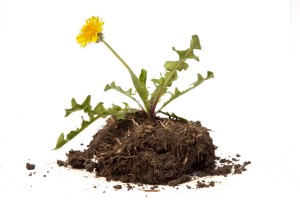 There has been a huge move towards organic gardening in the last few years. Many of the pesticides and herbicides that are sold contain dangerous chemicals that cause a multitude of health problems in humans and animals. But avoiding them complicates the process of taking care of tasks out in the yard, such as weed control. Many people have no idea how to make sure that dandelions don’t sprout up in places where they aren’t supposed to grow. Luckily, there are several natural methods for killing weeds that are very effective.

The acidity of vinegar doesn’t settle well with plants. So when it gets poured on top of them, they die off fast. Vinegar can be used either hot or cold. Pour it in a spray bottle for long strips of crab grass inching their way near your flower beds. Or get it boiling hot to pour over pesky milkweed that has taken over the lawn.

This method of natural weed control has to be used very carefully because nothing will grow in the lawn where it is applied. Mix together two cups of warm water with a half a cup of salt. When the salt is dissolved, apply the solution to weeds that are giving you the most trouble. It works the best along wire fences where it is difficult to use a mower.

Plain boiling tap water destroys the cells of a plant without damaging the surrounding soil, which is why it is one of the safest natural weed killers to use. Just be careful when handling the pan of water because it could result in skin burns. Pour the boiling water slowly, so it doesn’t splash on to the other plants that you don’t want to die off.

If the area of weeds is large and overwhelming, then try using newspaper to get rid of them. Simply cut the weeds back as close to the ground as you can with some gardening shears. Then, cover them with a heavy layer of newspaper. Cover the newspaper with mulch or gravel. This method works by blocking out the sunlight that the weeds need to grow.

Nothing beats the time-honored tradition of pulling weeds by hand. It takes longer to do, but it is more effective because it removes the roots of the plants that topical sprays don’t reach. To make weed-pulling easier, water the area heavily a day or two beforehand. Or wait until after a rainstorm. That way, the ground will be softer. Some garden centers also sell special tools for weed-pulling that makes the job less back-breaking. Just push the tool into the soil next to the weed. Then, pull straight up.

Another method of blocking out weeds is the application of mulch. This is more of a preventative measure though. It works the best when it is applied over the top of some landscaping fabric that is set on a weed-free area.

Use these tips to minimize weeds in your garden, landscape and yard areas.