Should I Trim Ornamental Grasses in the Winter? 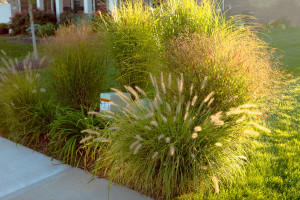 Some homeowners grow ornamental grasses in their gardens because many they retain their beauty or sculptural interest even through the winter. However, not all grasses are pretty when they go dormant and snow and ice arrive. Should some grasses be trimmed in winter?

The answer to the question is, generally, no, ornamental grasses shouldn’t be trimmed in winter. This applies to warm and cool season grasses.

Warm season grasses begin their growth in the middle of spring to the early weeks of summer and start to flower when temperatures are hot. The grasses then go to seed and turn brown, and if they are unattractive, fall is the time to trim them back. If they’re not trimmed in the fall, the gardener should wait and trim them in very early spring while they’re still dormant. They should be trimmed back fairly hard, with only an inch or two remaining above the ground.

As their name suggests, cool season grasses grow in early spring and fall after the last frost of the former and the first frost of the latter. They dislike heat and don’t grow much in the height of summer. Because these grasses are attractive even in winter, the gardener should wait till spring to trim them. However, they should not be cut back as hard as warm season grasses. The gardener should remove about two thirds of the plant. If the winter has been mild, the grass can be cut in the very last days of the season.

How to Trim Grass

Grass that doesn’t grow very tall can be trimmed with pruning shears. The blades must be sharp to avoid crushing the stems of the plant as opposed to delivering a clean cut. Crushing invites disease and pests. Taller grasses can be bundled together with their tops tied. This allows the stalks to be cut in one fell swoop, and in the end the gardener can just pick up the bundle and toss it in the compost bin or pack it in the truck to take it to the recycling place.

Some gardeners use power tools such as hedge trimmers or weed whackers to deal with tall grasses, while some still use scythes. Experts recommend using weed whackers with a blade as opposed to a string. Other gardeners make do with bread knives or pruning saws.

It’s also important for the gardener to be dressed properly when it comes time to trim ornamental grasses. Some of these grasses are razor sharp, and it’s imperative to wear thick, heavy gloves, long pants, long sleeves, and eye protection, especially if power tools are being used to remove them.

For healthy plants and a property that looks beautiful and well-maintained all season, there is plenty of upkeep you’ll need to stay on top of. Water, mulching, weeding, pruning, and fertilizing all need to be completed at the right times and in... Read More

Landscape pavers are incredibly versatile and can be used nearly anywhere on your property to add both visual interest and as a practical way to keep your landscaping neat. Pavers come in many styles, colors, materials, sizes, and shapes, so they... Read More

While spring and fall clean up get the attention as the “high-maintenance” periods of landscaping, there is plenty to address in the summer as well. By summertime, you just want to relax and enjoy your property without putting in the hours of... Read More

How to Keep Your Lawn Dry if You Have Clay Soil

Some areas are more prone to clay soil than others, and if you live in an area where the soil has a heavy clay content, there is not much you can do to change the composition. In fact, many builders can make clay soil worse. Machinery will break... Read More

Unlock the Full Potential of Your Outdoor Living Spaces

Most homeowners understand the importance of landscape design plans when it comes to maintaining their home’s curb appeal, but unlocking the full potential of outdoor living spaces will take your home to the next level. Whether it is a stunning... Read More

A good landscape design serves two purposes. A beautifully landscaped home will enhance your curb appeal and property value, which is important to many homeowners. In addition, landscape design that incorporates hardscapes such as stone pavers and... Read More

Overhaul Your Current Driveway with Pavers

A cracked, uneven, and stained driveway can negatively impact the curb appeal and overall aesthetic of your home. If you are putting effort into maintaining and upgrading the interior and exterior of your home, you need to pay just as much attention... Read More

Creative Ways to Address Poor Drainage on Your Property

Poor drainage on your property is more than just an annoyance you need to learn to live with. A soggy lawn after the rain is not where the problem ends. Poor drainage can cause insect problems, mold, mildew, erosion, rot, and even structural damage... Read More

Create an Oasis with the Help of Creative Landscape Designers

With summer approaching and many still wary of travel, many homeowners are planning to spend a good amount of time in their outdoor spaces. However, with the right landscape design, your backyard can become an outdoor oasis that you will love to... Read More

Many homeowners who struggle with yard drainage problems aren’t sure where to start, so they simply accept them as part of the property. But a wet yard is more than just an inconvenience or minor annoyance. Yard drainage problems, such as water... Read More
All Blog Posts
© Copyright 2021 Twin Oaks Landscape | Sitemap | Privacy Policy | ADA Disclaimer
Designed and Developed by Neon Goldfish