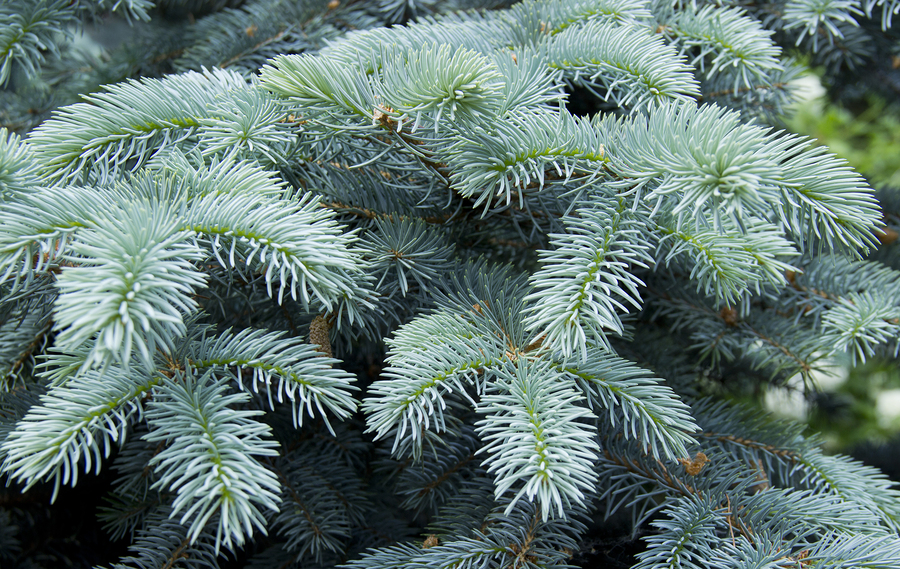 Canker diseases cause sunken areas to appear along the tree’s stems. These areas often leak resin. The cankers that develop are caused by a fungus that infects the branches or main stems of the tree. They can interfere with the tree’s ability to transport water and nutrients, which is why it often leads to flagging (which is the term used when individual branches die off).

3. Tip Blights Can Cause Dieback

Tip blights are another form of fungal disease that causes dieback to emerging shoots. They tend to be more common in pines, but they have also been known to affect spruce trees.

4. Blue Spruce Trees Can be Infected by Insects

Insects can cause great harm to spruce trees as well. Two of the most harmful insects include gall adelgids and spruce spider mites. Gall adelgids suck plant sap through the spruce’s shoots, thereby causing the shoots to deform. As a result, the galls resemble cones. Spruce spider mites are technically spiders and not insects; however, they can cause discoloration of the spruce needles, which will eventually die if affected.

5. Blue Spruce Trees are More Prone to Disease in Michigan

Blue spruce trees are native to Colorado and the Rocky Mountains. The climate here in Michigan is not nearly as cold and dry. During the summer, the humidity of Michigan provides an environment that fungal pathogens thrive in. As a result, blue spruce trees planted in Michigan are often more prone to fungal diseases.

6. Fungicides Can Help Control the Spread of Disease

Because blue spruce trees are mostly affected by fungal diseases, the use of fungicides can help to control the spread of the disease and potentially even prevent it. Fungicides can be particularly effective for treating needlecasts in order to protect new growth; however, it may require yearly applications for two to three years. For other diseases, such as canker diseases, fungicides may not be as beneficial. In this case, the best treatment is to remove the affected branches.

Fungal diseases can be difficult to spot — as can the presence of certain insects. This is especially true since symptoms don’t always show up right away. It’s why you should have your spruce trees inspected on a routine basis by a professional landscape service. A good landscape service will be able to catch any issues that your trees have early on, allowing them to take action to prevent further damage.

These are seven facts you should know about blue spruce disease in Michigan. If you think your blue spruce trees are infected or want to have them inspected, contact us at Twin Oaks Landscape today.