The blue spruce, also called the Colorado blue spruce, was first discovered in 1862 in the Rocky Mountains. Known for silver-blue needles that keep their color year round, this classic tree is a favorite of landscapers, wildlife, and is often found in attendance during the holidays as a Christmas tree. Known for its silvery evergreen foliage, there should be no reason for this tree’s needles to turn brown or drop off of the branches. 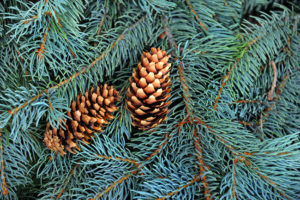 A healthy blue spruce can live for a very long time. Mature trees can reach up to 75 feet tall and up to 20 feet wide. Spruce are suited to grow in Hardiness Zones 2-7, preferring sunny locations with moderate moisture. Signs of a healthy spruce include:

In addition to these signs, trees growing in more ideal conditions will also be less susceptible to disease and stress, including pests and fungus.

Signs of a diseased blue spruce

A diseased blue spruce may show subtle signs at first. Be sure to watch out closely in trees that are growing outside their natural range or climate, as stressed trees will be more susceptible to tree blights. Older trees may also be at an increased risk, especially those older than 15 years of age. Disease often manifests in lower branches first. Signs of tree blight include browning needles, sap-like cankers, and dropped needles. The two most common diseases of the blue spruce are Cytospora Canker and Rhizosphaera Needle Cast.

Caused by the fungus Cytospora kunzei, this disease typically progresses over years. Needles lose their blue color as a dried rust hue starts spreading, often resulting in purplish branches. Instead of stiff and prickly needles, these former evergreens become dry and brittle. Severe infections can also penetrate tree bark, often where the branch meets the trunk. The dead bark and sticky residue associated with this form the namesake canker. Cankers can often resemble tree sap caused by other injuries- making early diagnosis difficult.

Treatment can be difficult, and the fungus is easy to spread. The best defense against canker disease is prevention. Whenever possible avoid stressing your tree by protecting against drought conditions and harsh freezes. Water adequately and mulch with 3-4″ of material in harsher climates. In diseased trees, avoid pruning when wet and clean all contaminated tools with rubbing alcohol to avoid spreading new spores. Fungicides in general, have shown little effect on this tree blight.

Rhizosphaera refers to the fungus Rhizosphaera kalkhoffii. Usually spotted in late summer, this disease causes new needles to become mottled or speckled, turning purple-brown by the second year of infection. These browned needles then drop prematurely (not normal for an evergreen). While the signs begin to show in summer, this infection normally starts in early spring in the middle of the tree and then spread upward. Fortunately, this disease is unlikely to kill your spruce but will definitely affect its appearance and overall health.

Fungus thrives in warm, wet weather. Removing dead branches and pruning clustered areas to promote ventilation can help control an infection. Alleviate stress such as drought by watering periodically. Copper-based fungicides can offer a preventive measure against needle cast, but cannot cure branches that are already infected. Professional landscapers and pest management services can help you determine the best fungicide and schedule for your area.

As discussed, spruce trees grow best in their natural environments and can become stressed when planted in less desireable locations. This stress can leave your spruce susceptible to tree blights. In addition to the climate of your planting, it is important to plant in the correct soil. Excess moisture, herbicides, and imbalanced Ph due to salts or fertilizers can also have a detrimental effect on your tree.

Pests may also post a problem. Pitch Mass Borers attack the trunk of a spruce, boring through the bark and leaving a sap-like residue. Unlike a fungus, borers usually kill the top of a tree first. Bark beetles are another common conifer pest, identified by the visible holes. Additional pest problems may include worms, miners, and mites.

Understand what is causing your blue spruce tree blight by consulting a local Michigan landscaping professional. Correct identification of your problem can create a treatment plan allowing you to enjoy this coniferous beauty for many years to come.