Which Type of Mulch is Best for Your Yard?

Landscaping mulch is available in more varieties and colors than ever before. While many homeowners choose a mulch based mainlyon appearance or price, this can lead to problems. Each type of mulch offers advantages and disadvantages depending on how you are going to use it. Choosing the mulch that’s right for your yard stats by evaluating what you are trying to accomplish. 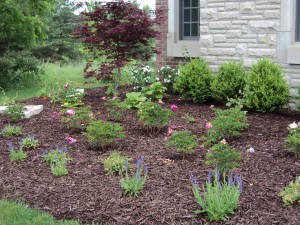 Shredded Mulch Stays Put
Shredded mulch starts out as the bark from a variety of trees that is shredded into fine strips. One of the most common sources of shredded mulch is cedar trees. This mulch is available in bulk or bagged form. It is an ideal solution for uneven areas, such as slopes or hills, as it will stay in place. It’s also effective at retaining ground moisture and preventing weed growth. Shredded mulch often comes in various colors, such as red and black, to suit the aesthetic desires of the homeowner. One drawback to colored mulch is that it sometimes bleeds the first time it is watered, so keep it away from light-colored sidewalks and pavers.

Some Plants Love Pine Needles
Pine needle mulch is popular among homeowners due mainly to its low cost. It is also lightweight and breaks down slowly, which keeps plant beds looking fresh. Pine straw can be used around trees or flower plantings to retain moisture and prevent weeds. It also increases soil acidity as it breaks down, making it ideal to use under azaleas, rhododendrons and other acid-loving plants.

Not Your Traditional Nuggets
Nugget mulch is comprised of tree bark that is left in chunk form. It comes in multiple sizes, from mini-nuggets to large-sized nuggets. In the southern states, this much is made primarily from pine trees, whereas hardwood nuggets are available in other locations. They are one of the slowest forms of mulch to break down, so they are ideal for season-long control of weeds. The biggest disadvantage of nugget mulch is that it does not stay in place very well and moves easily in high winds.

Rock Mulch Remedy
Rock mulch typically consists of either river rock or gravel and comes in a wide variety of pebble sizes. Rock mulch is a permanent mulching solution due to the difficulty in removing it later. It is ideal to use in areas where you don’t have anything planted, as it can stop erosion. Rock much should not be used around delicate plants. The rocks absorb heat during the day, which can kill plants that are nearby. If not in direct sunlight, rocks can be used in perennial plant beds that require little to no annual maintenance. Rock mulch is also a good choice for pathways, driveways and parking areas.

Water-Loving Lava Stone
Pumice mulch is also called lava rock mulch. It is lightweight and more porous than other forms of rock mulch. This increased porousness means that the rock retains water for longer, which is beneficial to plant roots. In addition, the traditional red or black coloring of pumice mulch adds an interesting spot of color to the landscape.