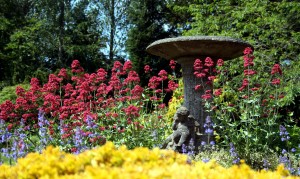 Apart from creating an ideal environment for breeding mosquitoes, standing water will most likely wreak all sorts of havoc on your yard. Except for plants such as cattails and rice, many plants cannot tolerate having more than their roots submerged for over three days at a time. In addition to this immediate destruction of lawn plants, standing water often causes other damages that can prove long-lasting. Listed below are some additional damages caused by standing water.

Compacted soil
Once exposed to adequate amounts of standing water, even relatively light soil tends to become extremely compacted. As the water moves downward, it washes soil particles into the natural gaps and cracks usually found in topsoil. The level of compaction can only be made worse by treading over the affected areas. As such, human and animal traffic over such areas often worsens the compaction. As you may well know, plant roots need oxygen at all times. Soil compaction minimizes the amount of oxygen present in the ground. By inhibiting plant growth, soil compaction is one of the long-term problems caused by standing water.

Plant deaths
In the short-term, standing water in lawns prevents oxygen from getting to the roots of almost every featured type of vegetation. As a result, most of the affected plants will weaken and become vulnerable to attacks from fungi, bacteria, and insects well before they succumb to the lack of oxygen caused by standing water. To make matters worse, the majority of these assailants reproduce easier and at a faster rate in wet soil than they do in dry soil. Unfortunately, harmful agents such as bacteria often continue their work long after the ground begins to dry out. Because your lawn plants cannot counter the fungal, bacterial, and insect attacks in their weaken state, the result is usually death.

Toxic soil
Standing water usually leaves behind toxic residues. As the standing water soaks into the ground, it often pulls a variety of garden and lawn chemicals, commonly dispersed around the yard, towards a low-level point, resulting in highly concentrated chemical levels. Plants die after being cut off from oxygen, and their rotting and decaying roots often generate a couple of chemicals. Hydrogen sulfide, which smells like rotten eggs, is one of the gasses created by decaying plant material. This compound forms an acid when it dissolves in water. Unfortunately, it can result in an extremely high level of soil acidity. Additionally, fermentation often occurs whenever dying plants mix with water. The resultant ethyl alcohol is capable of contaminating soil. Until the alcohol finally breaks down, it can interfere with your future replanting efforts.

Leached nutrients
Standing water usually seeps down into the soil in your yard. As such, it not only fills in the air gaps necessary for plant growth with the loose soil particles it carries down, but it also pulls the essential minerals and nutrients often found in top soil deeper underground. The unfortunate result is that these vital nutrients and minerals are no longer within reach. Lacking adequate nutrients and minerals usually leads to weakened, malnourished, or dead plants.

Increased cases of disease
Wet conditions ideally support the proliferation of specific plant-damaging fungus and bacteria. Even if the standing water recedes during the dryer periods, the plant-damaging fungus and bacteria are still present underneath the soil in larger quantities than before. As such, any future attack by these harmful elements once favorable conditions reappear will most likely be in greater numbers. Fusarium fungi and plant parasites such as pythium are potential threats.