As if Japanese beetles aren’t bad enough, now we have another problem to contend with.  Another introduced insect species is causing havoc in the northeastern United States.  The European Crane Fly was originally detected in New York State in 2004.   These damaging pests are native to northwestern Europe, and are now prevalent in the greater Detroit area, and in the Grand Rapids area of Michigan. 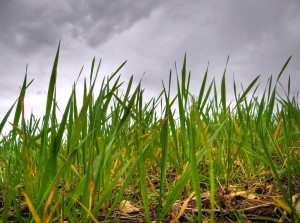 This little bug is causing severe damage on lawns and golf courses, and they also have the potential to damage a variety of crops as well.  In turf areas, the larvae favor areas with thatch build up and poor drainage.  The larvae, known as leatherjackets, are dependent on moist soil conditions, and do best with mild winters and wet cool summers.  Unfortunately, like the summer we just had! 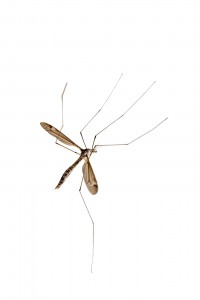 The adults look like a large mosquito, and emerge during a period of 2-3 weeks in September.  When they emerge, they will mate and lay eggs usually within the same night.  Each female will lay up to 300 eggs that are highly dependent on moisture, and will hatch in 10-15 days.  During this emergence, you may see empty pupal cases on the lawn (they look like little black twigs sticking up from the soil line).  The adult flies will being abundant and hovering low on the lawn, or congregating during the day on surfaces such as the side of buildings, sliding doors, window screens and fences. 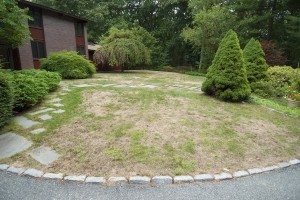 ts can be annoying, the primary damage is caused by the larvae.  Active larvae are usually found in the top 3 cm of the soil where they feed on the grass.  Larger larvae may even come to the surface to feed.  The injury to turf is done throughout late fall through early spring, and usually presents as yellowing spots and bare patches.  Early to mid-May is when injury is generally first noticeable.  By mid-June the larvae are done feeding and move deeper into the soil to await pupation.

Treatment is best taken against the larvae since the window for the adults is so narrow.  Management of soil moisture will help to control populations.  This would mean monitoring irrigation and even eliminating irrigation in the fall, and correcting any drainage issues in the lawn.

Spring grub treatments, in conjunction with a grub treatment applied in July or August, should protect against the Common and European Crane Fly, but regular inspections are always recommended.

We are continually doing more research on what the best treatments will be, so that we are prepared for any damage that our clients may be seeing this spring and will be ready with the most effective and economical treatment route.