We have been asked on numerous occasion about the plant Lavender. Here’s some words of advise from our horticulturalist 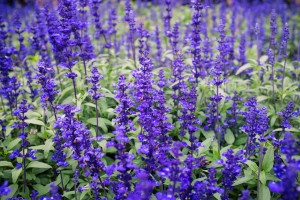 Generally people seem to treat Lavander (Lavenadula) as a perennial, however it is really a shrub. Officially we believe it is a called a subshrub. They fall into the same class a butterfly bush (Buddleia), Russian sage (Perovskia), blue mist spirea (Caryopteris) and St. John’s Wort (Hypericum). They can be pruned to the ground and should reflush from the roots.

Lavenders and their cousins form woody portions of the stems, here in Michigan the woody portions of the stems tend to die back in the cold and we typically cut them to the ground. Officially, Lavender should be pruned back by 1/3 in the fall each year – leaving a semi-woody base. Lavender tends to be a tough plant for us. It is hardly enough, but it doesn’t like our heavy soil. I also think that part of the hardiness problems is that people tend to really want to have lavender and smoother it with “love!” Lavenders do best and are happiest when left alone. Hot, dry and barren will produce a nice, longer lasting plant.

Lawn irrigation is important because it helps to ensure that your lawn stays healthy and green. It also helps to prevent your lawn from becoming too dry. There are many different ways to provide irrigation, but one of the most popular and effective... Read More

Expert Tips for Planting and Growing Iris in Michigan

The Iris plant was named after the Goddess of the Rainbow and blooms beautifully in the early summer season in Michigan. While there are many different types of iris plants from all over the world, there are a few that do well in this climate with... Read More

With so many different plants that all bloom at different times, it can be difficult to remember when and how to properly prune for optimal flowering. If you want to maximize your blooms and the health of your plants, pruning is important and can be... Read More

Investing in a lawn irrigation system is a smart choice for homeowners who want their lawns to look great without dedicating several hours to hand watering it. Hiring a professional to maintain your system is also a smart decision. With regular... Read More

Twin Oaks Landscape is excited to share that we recently hired someone who is well-versed in all things gardening! Kathy Squires was hired as an Assistant Designer and Sales Associate in early April and brings a new energy to the gardening aspect of... Read More
All Blog Posts
© Copyright 2022 Twin Oaks Landscape | Sitemap | Privacy Policy | ADA Disclaimer
Designed and Developed by Neon Goldfish