How to address garden pests. 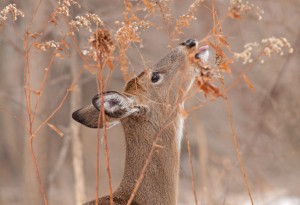 White tail deer – While deer may appear to be harmless, they are quite a nuisance in the garden. These super grazers leap over all but the tallest fences to devour the stems, leaves, and buds of many types of plants, including arborvitae, fir, alfalfa, and roses. They also eat fruits and vegetables.

How to Identify Deer in your Garden

If you notice jagged edges on your plant leaves and cloven hoof prints in your garden, then you probably have a deer problem. Watch out for their bean-shaped droppings as well.

How to Get Rid of Deer

There are many techniques you can try to deter deer from munching on your plants. Try some of these methods for your garden:

What are Japanese Beetles? 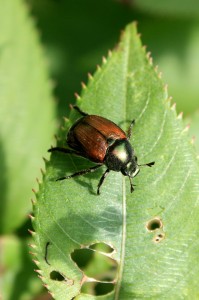 Japanese beetles are small pests that carry a big threat. They do not discriminate on what types of plants to feed on, in fact, they are classified as a pest to hundreds of different species. They are one of the most major insect pests in the Eastern and Midwestern US, causing monumental damage to crops each year. Native to Japan, they were first documented in the US in 1919, and have since spread across the country.

How to Identify Japanese Beetles

Japanese Beetles are ½ inch in length and metallic blue-green with tan wings, with small white hairs lining each side of the abdomen. They lay eggs in the soil during June, which develop into tiny white grubs. These grubs will remain under wraps for about 10 months and overwinter and grow in the soil. They emerge from the soil as adult beetles and begin feeding in June. They usually attack plants in groups, which is why damage is so severe. Although the lifecycle of the adult Japanese beetle is barely 40 days, it can cover a lot of ground. Look for leaves that are “skeletonized” (only have veins remaining). This is a tell-tale sign of Japanese Beetles.

How to get rid of Japanese Beetles 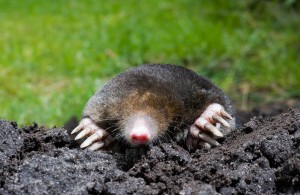 Moles are ground–dwelling carnivores that prefer to eat insects instead of your garden plants. However, their underground tunnels can ruin your garden and lawn and make an easy access to your plants for other rodents.

How to Identify Moles in your Garden

Check your soil and lawn for their tunnels. They will look like raised swellings in your yard. They prefer moist, loamy soil and are most active in the early morning or evening in the spring or fall; they also come out after a warm rain.

How to get Rid of Moles