How Much Damage Can Standing Water Damage Your Garden?

Aside from creating a bumper crop of mosquitoes, standing water in the garden has the capability of wreaking all 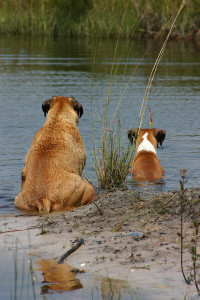 sorts of damage on the garden itself. With the exception of such plants as rice and cattails, very few others can tolerate having at least their roots submerged for more than a couple or three days. Beyond this immediate destruction, standing water can inflict other injuries that could prove to be long-lasting. A short list of these harms include the following.

Dead Plants
In the short-term, stagnate water prevents oxygen from reaching the roots of garden plants. Even before the plants die from this, they will become weakened and vulnerable to attacks from insects, bacteria, and fungi. To make things worse, a lot of these assailants reproduce more easily in wet soil. These agents can continue their work even after the soil begins drying out.

Compacted Soil
Even relatively light soils like those in Ann Arbor MI can become very compacted when exposed to enough standing water. The water helps wash soil particles down into natural cracks and gaps in the topsoil as it moves downward. If either human or animal traffic treads over these areas, the compaction will be made even worse. Since plants need oxygen reaching their roots at all times, this can become a long-term problem that can inhibit plant growth.

Leached Nutrients
As stagnate water in the garden flows downward, it not only carries loose soil to fill in vital air gaps needed by plants, it also pulls important nutrients and minerals deeper underground as well. This takes them out of the root zone where they’re usable by plants.

Disease Growth
Wet conditions promote the proliferation of certain plant-damaging bacteria and fungus. Even when they recede during dryer periods, they’re still available in the ground in larger quantities than before. This allows them to attack in bigger numbers when favorable conditions reappear in the future. Among the potential threats are fusarium fungi and plant parasites like pythium. Root and crown rot are both produced by the pathogen phytophthora that’s widespread and includes Ann Arbor MI in its territory.

Soil Toxins
Another long-lasting problem left behind when water builds up in the garden is toxic residues. Various garden and lawn chemicals that are normally dispersed in the garden can become concentrated as water soaks into the ground and pulls them towards the center of a low spot. When plant roots are cut off from oxygen and begin to die, a couple of chemicals can be generated from the subsequent rotting and decay. Hydrogen sulfide, the gas that smells like rotten eggs, is created by decaying plant material. This chemical can dissolve in the water to create acid that can raise soil acid levels too high. Also, dying plants mixed with water provide a good opportunity for fermentation to occur. The resulting ethyl alcohol can contaminate the soil and interfere with later replanting until the alcohol eventually breaks down.