Five Warning Signs That You Should Consider Yard Re-Grading

Grading the grounds of a property is an important yet often neglected part of basic home upkeep. Occasional yard re-grading when it’s called for prevents property damage over the long haul and will help your landscaping to stand out. Ann Arbor MI homeowners need to be particularly vigilant to avoid the unforeseen consequences of a yard without proper grading. Here are a few classic signs that yard re-grading should be performed soon.

Even lawns that are generally sloping in the right direction tend to develop irregularities that need to be smoothed out eventually. If your lawn looks like a mogul course at a ski resort, it’ll trap water in pockets and drain poorly. Besides being a pain in the neck to mow, such a lawn can lead to a host of landscaping maladies and structural problems inside homes.

Even the hardiest plant life is vulnerable to excessive amounts of water or a severe lack of moisture. That’s why drainage is so important. If your lawn and peripheral flora isn’t thriving, there’s a good chance that an abundance or dearth of groundwater is to blame. If lawn under-performance can’t be explained by heat waves and fertilizer issues, re-grading the yard could do the trick. 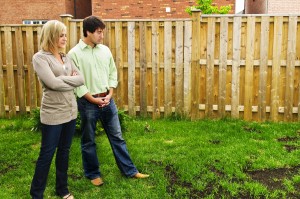 French drains, gutters or culverts will all eventually clog with sediment if the lawn isn’t graded in the proper fashion. Water should flow away from a building in a uniform, predictable manner so long as it’s not being impeded by topsoil that’s too loose or too compact. Slow-moving water will deposit too much sediment that will eventually build up and clog even the best drainage pipes given enough time.

Standing Water in the Basement

In some areas, a sump pump in the basement is assumed to be the cost of doing business or rather the cost of living. The reality is that no house should have water pooling in the cellar regardless of location or the prevailing climate. Grading the yard properly is the first step towards ensuring that water doesn’t accumulate in the lower levels of a house.

Even if water isn’t seeping into a basement, it can still do some serious damage by pooling against the concrete underground. If the sealant barrier is still doing its job, you won’t see cracks right away. However, concrete cracks could be a sign that things are headed south quickly. Yard re-grading should be undertaken ASAP when foundation cracks appear as a precautionary measure if you care about your house’s structural integrity.

When to Bring in the Big Guns

If your yard isn’t in awful shape, you can rectify minor grading-related problems by yourself whether you’re in Ann Arbor MI or Tuscon AZ. When serious drainage issues strike, it’s best to get an expert to address things. The expense associated with re-grading a yard pales in comparison to the cost of fixing the problems that will occur if you don’t.

Get your yard looking its absolute best with custom landscaping solutions from Twin Oaks. Find us online at https://www.twinoakslandscape.biz/, visit us in Ann Arbor, MI at 4100 South Maple Road, or call us at (734) 213-6911.