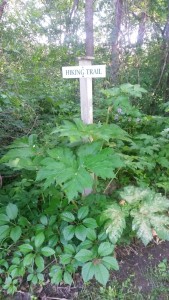 We have found this weed in several locations throughout Ann Arbor. Below is a recent photo taken of the weed prior to it blooming flowers. In addition, another photo showing the weed with flowers.

It typically grows to heights of 6 ft 7 in–18 ft 1 in. Superficially, it resembles common hogweed (Heracleum sphondylium), Heracleum sosnowskyi or garden angelica (Angelica archangelica). It is phototoxic and considered to be a noxious weed in many jurisdictions.

Giant hogweed is native to the Caucasus Region and Central Asia. It was introduced to Britain as an ornamental in the 19th century, and it has also spread to many other parts of Europe, the United States and Canada.

The sap of giant hogweed causes phytophotodermatitis in humans, resulting in blisters, long-lasting scars, and—if it comes in contact with eyes—blindness. These serious reactions are due to the furocoumarin derivatives in the leaves, roots, stems, flowers, and seeds of the plant.

Description
Giant hogweed has a stout, bright green stem that is frequently spotted with dark red and hollow red-spotted leaf stalks that produce sturdy bristles. The hollow stems vary from 3–8 cm (1.2–3.1 in) in diameter, occasionally up to 10 cm (3.9 in). Each dark red spot on the stem surrounds a hair, and large, coarse white hairs occur at the base of the leaf stalk. The plant has deeply incised compound leaves which grow up to 1–1.7 m (3 ft 3 in–5 ft 7 in) in width.

Giant hogweed is a short-lived perennial (lasting typically between five and seven years),[citation needed] with tuberous rootstalks that form perennating buds each year. It flowers in its final year from late spring to mid summer, with numerous white flowers clustered in an umbrella-shaped head that is up to 80 cm (31 in) in diameter across its flat top. The plant produces 1,500 to 100,000 flattened, 1 cm long, oval dry seeds that have a broadly rounded base and broad marginal ridges. The plants are monocarpic, dying after they have set seed. Plants in earlier stages of growth die down in late autumn or early winter. Tall dead stems may mark its locations during winter.
Introduction to Western Europe and North America
Giant hogweed was among many foreign plants introduced to Britain in the 19th century, mainly for ornamental reasons. It is now widespread throughout the British Isles, especially along riverbanks. By forming dense stands, they can displace native plants and reduce wildlife interests.[8] It has also spread in the northeastern and northwestern United States and southern Canada. It is equally a pernicious invasive species in Germany, France and Belgium, overtaking the local species.[8] It was introduced in France in the 19th century by botanists, where it is much appreciated by beekeepers.
In Canada, the plant has been sighted in British Columbia,

Hogweed is regulated as a federal noxious weed by the US government, and is therefore illegal to import into the United States or move interstate without a permit from the Department of Agriculture. The USDA Forest Service states pigs and cattle can eat it without apparent harm.