Attracting Pollinators to Your Yard 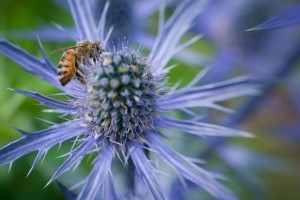 Pollinators are necessary for life on earth, but they are taken for granted. Many people were indifferent to honey bees until their colonies collapsed. Then, they realized the honey bee’s vital importance to agriculture.

It’s easy to attract pollinators to a yard, whether they be bees, bumblebees, flies, butterflies or certain types of wasps. Here are some tips:

Some gardeners buy hives and bees to set up near their gardens or orchids. But if a gardener or homeowner doesn’t want to set up their own hives, they should plant flowers that are abundant in nectar and pollen. Examples of plants with such flowers include peppermint, blackberries and white sage.

These large, fat bees gather pollen on their bodies and hind legs and cross-pollinate plants as they travel from one flower to the next. They are active in the morning and evening and can be seen reveling in the opened flowers of melons and squash just after sunrise. They nest on or in the ground and feed their larvae pollen and honey.

These are tiny black or brown wasps that feed on pollen. The gardener should grow flowers that blossom in earliest spring or even late winter to support them during the cooler months. These include crocuses and Carolina jessamine. Braconid wasps also feed on the nectar of plants with small flowers. These include wild carrot and mint. The best thing about Braconid wasps is that they lay their eggs on pests such as gypsy moths, tomato hornworms, codling moths and cabbage worms. When the eggs hatch, the larvae eventually kill the insect.

Hover flies are black and yellow striped and resemble bees and wasps, but they don’t sting. They get their name because they hover over flowers. They are very efficient because they need pollen to reproduce, and their larvae eat aphids. Hover flies love nectar rich flowers such as coreopsis and feverfew. 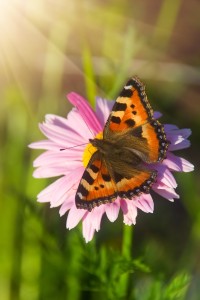 These beautiful insects are the most welcome of pollinators. Even though their larvae may chew on some of the host plants, populations of larvae are kept in check by flies, wasps and other predators. Plants are also tougher than is thought. A plant can lose a lot of its leaves and still remain healthy.

Another trick to attract butterflies is to use the garden hose to dampen a patch of ground now and then and toss out fruit to rot. This attracts butterflies.

There are hundreds of species of insects waiting to pollinate the flowers that grow in a yard. Designing a garden to attract them is fun, and the results are lastingly beautiful.